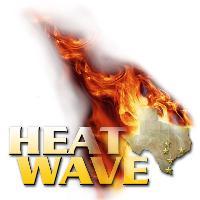 Let me be clear. I don't love the horrendous heat-wave that's battered Texas this year. BUT, if we're going to suffer through such a hot summer and be so close to breaking record(s), then we might as well go all out! Luckily, relief from the heat is in the near future. We're supposed to get a cool front Thursday, which will drop our highs into the 80s. I'm definitely ready for some cooler weather (but I'm glad that we broke some records)! I'm a bit concerned, though because the relief from the heat includes chances of storms. We desperately need rain (and an end to this drought), but storms are rough on my migraines. I'm bracing for a bumpy ride.
Posted by Jamie at 9:30 PM

Email ThisBlogThis!Share to TwitterShare to FacebookShare to Pinterest
Labels: weather