Update on First Round of Botox

I want to share how my first round of Botox went. Let me start by linking to the process I in deciding to try Botox as a treatment for my chronic migraines:

I also wrote a post right after having the injections (in August 2013):  First Round of Botox.

So, back to how things have been the past (just under) 3 months. I feel pretty confident in saying that I didn't get any relief from Botox. Things are a little complicated because I was off one of my preventive supplements for a couple weeks, right when Botox would've been starting to help. I ran out of the supplement (due to a problem with automatic refills) and was off of it for a couple weeks. Just before I ran out, I talked to my doctor, and we decided to just discontinue because it didn't seem to be helping (after a few months). I think the increase in pain was because of stopping the supplement - not necessarily that the supplement was helping, but just the process of getting off of it.

I've been back on the supplement for about six weeks, I believe. My pain levels have been better the last couple weeks. But, is it due to being back on the supplement? Botox wearing off? Or any number of other factors? It's so frustrating to not know, since there are so many factors at play all the time.

Will I have a second round? I'm not sure. Honestly, I have very mixed feelings about it. I don't think it helped at all (and may have actually worsened the pain for a while), but that's not to say that another round wouldn't. I don't have such negativity about it that I feel that it won't help at all, but I'm also not super hopeful that another round will provide relief. My doctor doesn't really think it'll help, but he's willing to try another round.

With that said, I'm in the interim right now. My doctor said that insurance may not cover another round because the first round didn't provide relief. I've had my doctor's office submit a request for another round to be approved by my insurance, so I'm waiting to hear back (I would need to do the second round in the next week or two).

I don't know that I really want to do another round, though.

I was blessed that our insurance covered my first round of Botox 100%. So, I think I may go ahead and do a second round if insurance will cover it. But, I'm not going to pay out-of-pocket for a second round. I've found myself hoping that God will put obstacles in place, if I'm not meant to... not that that indicates that I'll get relief if He doesn't put up obstacles, but yea.

For better or worse, that's my first round of Botox experience. I'll let y'all know, if I end up trying another round in the future.

*Update:  I just heard back from my doctor's office. My insurance has approved another round of Botox. Since my insurance hasn't changed since last time, we're assuming it'll be covered 100%. So, I'm going to pray on it, and talk to Jeremy about it today. I have November 18 temporarily scheduled, but I told them I'd let them know whether or not I'm going to go through with a second round. So, please keep me in your prayers - I need guidance and discernment for what I'm supposed to do.

This post was written as part of the National Health Blog Posting Month (NHBPM). Other bloggers will share their posts on this FB page.
Posted by Jamie at 1:30 PM 6 comments:

Today's topic is "Training Wheels. Write about a time your health condition forced you to grow up and take the training wheels off (so to speak)."

I've lived with chronic pain since (at least) my teens. It wasn't always debilitating (thankfully), like it often is now. Living with chronic illness can definitely force you to grow up more quickly.

Most people in their teens and twenties don't visit their doctor(s) frequently - usually just for physical exams, vaccines, and if they get sick with something along the lines of a cold / flu. Many don't give their health a second thought because it rarely even appears on their radar. They're free to live life without thinking about the health-related consequences of doing even the simplest of tasks. Life is lived without the concern of whether or not their health with hold up that day, week, month, year, etc... good health is considered a given, somehow.

I started seeing specialists in my teens to try to diagnose and treat my symptoms (that, except for an injury which had a clear diagnosis and treatment, were all invisible illnesses without clear diagnoses or treatments). Around the same time, I also started tracking my symptoms in a health calendar, which I've kept ever since (though it has transformed over the years). Not as much when I was in my teens, but I've increasingly had to consider whether participating in something would increase the pain. Since my migraines became chronic, I'm faced with actively weighing out how doing even simple tasks will affect my health. My health is not only on my radar, but it's plays a prominent role in my life and the decisions I make daily.

After living with some sort of chronic pain for so much of my life, it's hard to pinpoint a single situation that my "training wheels" were taken off. Chronic illness forces you to acknowledge your limitations and accept your life as it currently is. 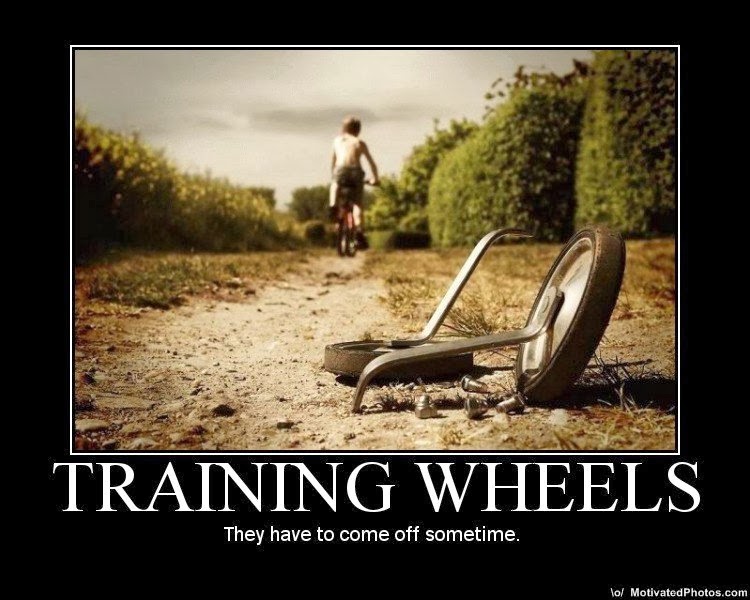 Perhaps one situation that required my "training wheels" to be removed was my decision to move to Tulsa to start graduate school, less than a year after my car accident. I went from living with my parents to living on my own, several hundred miles away. I had to figure things out on my own, in ways that I hadn't before. I'd lived on my own before, but never with the level of chronic illness I've experienced following my accident. It was frustrating because I knew what needed done, but I physically and/or emotionally couldn't do it all myself. Learning to ask for and accept help was (and continually has been) an important lesson living with chronic illness has taught / is teaching me.

This post was written as part of the National Health Blog Posting Month (NHBPM). Other bloggers will share their posts on this FB page.
Posted by Jamie at 9:30 AM 2 comments: