Letter to My Mind & Body

I want so badly to help you feel better, but I don't know or understand what you want from me or what you're trying to tell me. Why do you keep sending me mixed / unclear signals?

Why do various treatments seem to work for a short amount of time, and then they stop? After years of trying so many different medications (I hate putting so many chemicals into you!), we had the neurostimulator trial, which resulted in zero migraines for a week - successful (yay!). But, since I had the permanent stimulator implanted, you've had a difficult time recovering and working with the device.

How do you expect me to eat well and exercise at all, when you're constantly in a state of panic? I know that you're sensitive to light, so we have dimmed lighting, dark curtains, dark sunglasses, tinted windows, etc. I know that you're sensitive to sound, so we have volumes turned down and I limit exposure to crowded or loud areas. I do my best to stay away from smells (such as perfumes and candles) and tastes that bother you. I know that you ache all over, so I sit/rest/take breaks/etc. much more often than I used to. I do all of these things to make you feel better, but you don't respond well at all. Am I not making enough changes? ...not making the right changes?

Why do you not enjoy the things you used to? I know you had problems with depression before all of this pain, and I know that the depression is worse now; but that doesn't mean that you just shouldn't feel positive things anymore. You seem fine feeling anger, sadness, depression, fear, guilt, etc. Why do you block joy, happiness, excitement, etc?

Why are you preventing me from being able to read and write? I used to love reading and writing. I used to be so smart, and now I can barely follow a short article or conversation. My cognitive functioning seems so impaired that I feel stupid a lot of the time. Have you lost the ability to do the things I'm struggling with...or is it the illness...or the medications?

But, with all that said... I admire you for all that you've been through! The past 2.5 years have been horribly challenging, and you've endured so much. I'm doing my best to take care of you. I'm continually learning more about migraines and possible treatments (both conventional and complimentary). I promise to keep trying to improve, and to be more appreciative of how much you constantly endure. 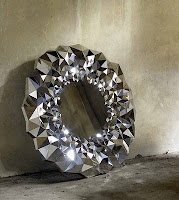 I've never really ever had many mirrors in my house or apartment... I've never really seen the need to. I've never enjoyed gazing endlessly into a mirror at myself, though I mostly didn't mind looking at myself for a moment or two. There were times, when I was depressed - I would look into the mirror for a long time and cry endlessly for no real reason - but depression is its own beast.

Since my car accident and the onset of my chronic migraines, I've lived my life very much in the dark. Dark curtains shield me and all my belongings from the outer world and light. One day, I noticed that none of our decor included mirrors - of all the things hanging on our walls, none were mirrors, and most were canvas (so no glare from glass front). I decided that my migraines were the reason for not having mirrors - reduce reflections of light, etc.

Email ThisBlogThis!Share to TwitterShare to FacebookShare to Pinterest
Labels: identity 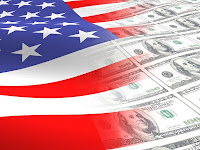 Medicare remains an obstacle course that I feel tangled up in. But, no matter how confusing the intricacies of Medicare are, it's something else that bothers me more right now.

All of the state and federal financial assistance programs that say they're for "low income" families LIE! They're for "low asset" families. My husband has no job (and no unemployment income... a whole different battle...), so our ONLY income is Social Security Disability and a little bit of private Long-Term Disability (= low income). However, we do NOT qualify for financial assistance because we started saving our money when we were very young. I started a 401K with my first full-time job, and I made sure to save before and while I was working. The mere fact that we did the right thing and put our money away in savings means that we now have to suffer the consequences. What the heck?! We could've just spent the money, and then had the government pay for our Medicare premiums and other financial assistance (e.g., Supplemental Security Income).

Don't get me wrong, I know that there are people out there that are in situations that they truly do need these programs. But, I think the way the programs are set up leave them WAY too open for ABUSE. I mean, the only way to get an increase in Social Security Disability is to have a child (or more children)... me now having a spouse doesn't matter, but if we have a child... I think it's the same way with Welfare. Really?! Does that make any real sense? Think about the implications of a system that works this way.

Please don't get me wrong! We're NOT looking for free handouts. We've worked hard for the money we have, and we intend to keep doing so (just as soon as we can find my husband a job...).
Posted by Jamie at 11:00 AM 4 comments:

Change: Life Since the Accident (Jan 6)

I was looking through some of my blog posts, and I came across some posts that I wrote back in January and February but that apparently never posted. So, I thought I'd go ahead and share them (with the original date they were written in the titles). 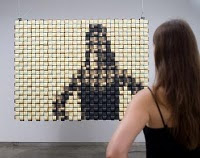 In some ways, it's as though my life before my car accident didn't even exist... Everything has changed so much that nothing seems to work the same...
Don't get me wrong, I know that aspects of life change over time; but it's different when something (like a car accident) abruptly (and drastically) alters your life. I'm not sure yet how to re-define myself, and that frustrates me to no end!
Posted by Jamie at 11:00 AM 4 comments:

I realized that I haven't updated on how I'm doing health-wise in almost a month. My last update was after I had been to both of my doctors in Texas - receiving an unofficial diagnosis of Fibromyalgia, and having my neurostimulator adjusted.

Having my neurostimulator adjusted started out great. I didn't have a migraine for a week and a half straight, after I had one of the programs that I had liked during the trial added back (my rep accidentally deleted it before). A week and a half! Since then, though... I've had ups and downs, recently more downs. There are a lot of weather changes and a lot of pollen in the air (Spring is in the air), so that's wreaking havoc with me and my allergies... might be a contributing factor to the worsening of the head pain. Overall, I'm still trying to just be patient with the neurostimulator. I know that it can work, I've experienced it... I just need to wait for my body to finish adjusting to the device, and then work on re-programming it, so that we can maximize on those good days.

On a different note... I've gotten off of one medication, started on Lyrica, and stepped up the dosage on the migraine preventive I've been on since Sept/Oct (Topamax). I was able to come off of the one medicine without problems. But, then things become far more difficult to differentiate between whether they were caused by migraine, fibro (if I even really have it), one of the medications, or something completely different.

Late last week, I began having a lot of problems with dizziness. I had to sit down and rest quite often because I felt weak and unsteady, as though I was rocking back and forth on a boat... actually, I was rocking back and forth (according to my husband). These feelings worsened over the weekend. By Tuesday, I was unable to stand long enough to take a shower (after having been sitting or laying down for most of the previous 96 hours). My legs were so wobbly, shaking so uncontrollably... I was so grateful that my grandmother had given me a shower chair a month or so ago. But needing to use it was one of the most humbling experiences I've ever had. I already don't shower as often because it wears me out so much, but to not even be able to make it through a shower without needing to sit down... Wow.

My migraines have also been super-bad, especially the past week and a half. It's been pretty much non-stop... pain levels getting just enough below migraine to prevent me from taking a trip to the ER. With all of this happening, my world has been spinning around me; but I was able to call my doctor today. I explained the plethora of new symptoms I've been experiencing.

We're going to back down a little on the Lyrica, and see if that helps. I'm going to stop the narcotic pain killer that I've been using as my abortive migraine treatment. My doctor said that he doesn't have anything to replace it with. What the heck?! I know I've tried A LOT of meds, but really? Nothing?! I can't just do nothing! I'm going to re-try some of the abortive meds I've tried before with some relief, and maybe they'll work better in conjunction with the neurostimulator. I'm also going to have blood drawn to check my electrolytes and thyroid levels. (I'm going to set up an appointment to have a physical and blood test to test all kinds of other things, but my headache doctor wants to get these things tested now).

I really want to write. I've been itching to write, and hating that I haven't been. I actually started writing in my paper/pen journal again... after a VERY LONG time of not doing it. I've also been attending a class at church, which has me doing some soul-searching. It's all been hard with my increasing migraines (and with the words looking like they're moving on the paper/screen) and worsening cognitive functioning/processing... perhaps there are a few things there that I can write about in future posts...

"Faith is not a hothouse plant that must be shielded from wind and rain, so delicate that it has to be protected, but is like the sturdy oak which becomes stronger with every wind that blows upon it.  An easy time weakens faith, while strong trials strengthen it." ~ Katherine Workman
Posted by Jamie at 11:30 PM 8 comments: