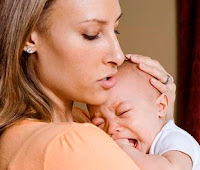 A recent study suggests that there's an increased risk of infant colic in mothers with migraines. Amy Gelfand, M.D., from the University of California in San Francisco, and colleagues analyzed data from 154 mothers at their infant's 2-month-old well-child visit. "Mothers with a history of migraine were more than two-and-a-half times more likely to have a baby with colic than mothers who didn't have migraine," said study author Dr. Amy Gelfand. Based on this data, the study authors found that

Infantile colic is "a condition in which an otherwise healthy baby cries or displays symptoms of distress (cramping, moaning, etc) frequently and for extended periods, without any discernible reason." One of the common colic remedies is known as the "five S's system" by Dr. Harvey Karp: swaddling, side-lying, shushing sounds, swinging / swaying, and sucking.

One theory that has surfaced is that colic may be an early manifestation of Migraine. People that are prone to Migraine react to overstimulation in different ways throughout their lives, and colic may be the way infants experience Migraine. With that being a possibility, some steps that can be taken to try to help soothe your colicky infant include: turning down loud music, decreasing stimulation, keeping a strict routine, and/or retreating to a dark, quiet room (note that these are common ways in dealing with migraines as adults). It may also be beneficial to keep a "colic / crying diary" to track colic flare-ups, anything that seems to calm the baby, and so forth (again, similar to an adult Migraineur's "headache diary").

While it is far too early to make many assumptions based on this research, it does provide another clue into the evolution of Migraine throughout an individual's life, and possible non-medication strategies that help some adult Migraineurs to try to relieve a colicky baby.

The findings were released online Feb. 20, and Gelfand and colleagues will present them in April at the American Academy of Neurology's annual meeting in New Orleans. (Note: The data and conclusions of this research should be viewed as preliminary until published in a peer-reviewed journal)
Posted by Jamie at 2:00 PM 2 comments:

Email ThisBlogThis!Share to TwitterShare to FacebookShare to Pinterest
Labels: migraine
Newer Posts Older Posts Home
Subscribe to: Posts (Atom)
Disclaimer: Nothing on this blog is intended as medical or legal advice.