POSTDROME (aka. migraine hangover) is the last stage of a Migraine attack that some Migraineurs experience, once the headache pain has subsided. The postdrome symptoms may continue for several hours or even days. Symptoms of this postdrome may include: 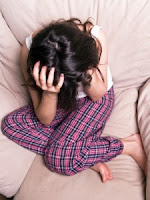 My postdrome experience really is feeling "hungover" from everything that having a Migraine attack entails, but I also have a medication hangover from the meds I take for my worst migraines. Having both of these at the same time is rough. It's taxing on my body, and my mind starts to wonder when the next attack will be. I think I experience all of the above symptoms, though I believe my irritability is worse during the prodrome phase. Even my hair hurts. It's incredibly exhausting.