Journey to Christmas: Knowing Our Christ

This is Part V of "Journey to Christmas"

He will not judge by what he sees with his eyes,
or decide by what he hears with his ears;
but with righteousness he will judge the needy,
with justice he will give decisions for the poor of the earth.
He will strike the earth with the rod of his mouth;
with the breath of his lips he will slay the wicked.
Righteousness will be his belt
and faithfulness the sash around his waist.

The wolf will live with the lamb,
the leopard will lie down with the goat,
the calf and the lion and the yearling together;
and a little child will lead them." (Isaiah 11:1-6) 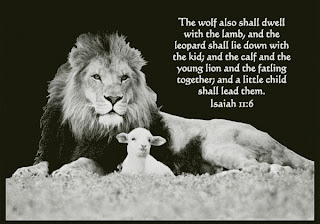 "And it came to pass in those days that a decree went out from Caesar Augustus that all the world should be registered. This census first took place while Quirinius was governing Syria. So all went to be registered, everyone to his own city.

Joseph also went up from Galilee, out of the city of Nazareth, into Judea, to the city of David, which is called Bethlehem, because he was of the house and lineage of David, to be registered with Mary, his betrothed wife, who was with child. So it was, that while they were there, the days were completed for her to be delivered. And she brought forth her firstborn Son, and wrapped Him in swaddling cloths, and laid Him in a manger, because there was no room for them in the inn.

Now there were in the same country shepherds living out in the fields, keeping watch over their flock by night. And behold, an angel of the Lord stood before them, and the glory of the Lord shone around them, and they were greatly afraid. Then the angel said to them, “Do not be afraid, for behold, I bring you good tidings of great joy which will be to all people. For there is born to you this day in the city of David a Savior, who is Christ the Lord. And this will be the sign to you: You will find a Babe wrapped in swaddling cloths, lying in a manger.” And suddenly there was with the angel a multitude of the heavenly host praising God and saying:
“ Glory to God in the highest,
And on earth peace, goodwill toward men!”

So it was, when the angels had gone away from them into heaven, that the shepherds said to one another, “Let us now go to Bethlehem and see this thing that has come to pass, which the Lord has made known to us.” And they came with haste and found Mary and Joseph, and the Babe lying in a manger. Now when they had seen Him, they made widely known the saying which was told them concerning this Child. And all those who heard it marveled at those things which were told them by the shepherds. But Mary kept all these things and pondered them in her heart. Then the shepherds returned, glorifying and praising God for all the things that they had heard and seen, as it was told them." (Luke 2:1-20) 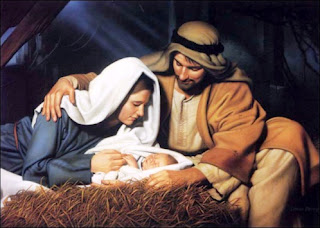 Nothing was ready on the first Christmas - Mary and Joseph were a young, unprepared couple; the Christ-child was born in a dirty barn; the lowly shepards were there to witness the birth. Nothing was prepared or ready... and, we don't have to be completely "ready" before doing what God is calling us to do. He wants to dwell in the midst of the muck of our lives. So, even though we might feel like we must have everything in order and "just right" before we do God's calling, we don't. He'll take us from wherever we are, however we are.

On that first Christmas, nothing was ready and that night didn't change a single thing in the reality of the world that night... except for the people. The people were changed that night. And, we're meant to allow Christ to change us.

Lord, there is so much darkness in this world - pain, grief, broken relationships, and so forth. Please let the light of Christ shine on the darkness in me and the world.
Posted by Jamie at 10:45 PM