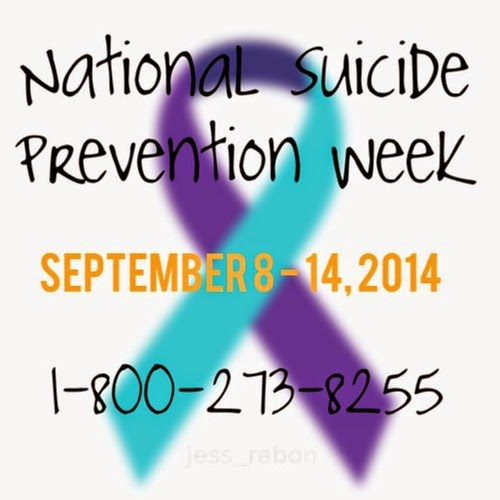 
"Suicide claimed 39,518 lives in 2011 in the United States alone, with someone dying by suicide every 13.3 minutes. A suicide attempt is made every minute of every day, resulting in nearly one million attempts made annually."

The AFSP sponsors Out of the Darkness Walks, where "you join efforts with thousands of people nationwide to raise money for AFSP’s vital research and education programs to prevent suicide and save lives. The walks raise awareness about depression and suicide, and provide comfort and assistance to those who have lost someone to suicide."

Some dear friends of mine will be participating in their community's Out of the Darkness Walk on September 20th. I will be offering my prayers, support, and encouragement.

More information about suicide prevention can be found:
- You Matter, Let Us Help You Through
- American Association of Suicidology
- National Suicide Prevention Lifeline
- World Health Organization

If you, or someone you know, is in suicidal crisis or emotional distress, please call the National Suicide Prevention Lifeline at 1-800-273-TALK (8255).
Posted by Jamie at 1:00 PM