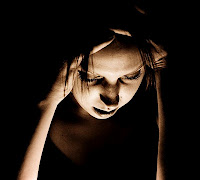 A recent study suggests that women with a history of migraines have about a 40% increased risk for depression. The researchers at Brigham and Women's Hospital in Boston analyzed data from more than 36,000 women (aged 45 or older, who did not have depression and had answered questions about their migraine history) in the U.S. Women's Health Study. Dr. Tobias Kurth (senior study author) and his colleagues found that

more than 6,400 of the women had current or past migraines, and that during an average 14 years of follow-up, nearly 4,000 developed depression (Migraines May Raise a Woman's Odds of Depression).

The authors also found that

Depression is mental health condition that is characterized by persistent feelings of sadness, hopelessness, and despair; persistent fatigue / lack of energy; persistent feelings of worthlessness or guilt; impaired concentration and/or indecisiveness; persistent insomnia or hypersomnia (excessive sleeping); loss of interest in once pleasurable activities; recurring thoughts of death or suicide; significant weight loss or gain. Of course everyone feels down from time to time, but depression lasts for weeks (or more) and reduces your ability to function normally.

While it is premature to make many assumptions based on this research, the study confirms a long-suspected link between migraines and depression (i.e., comorbid disorders). Future studies should explore the link between migraines and depression for younger females (as this study only included age 45 and older) and males (of all ages). It should also be noted that the number of women with depression may be greater than the study showed, since the diagnosis was based on self-reporting.

This study is scheduled for presentation at the American Academy of Neurology annual meeting in New Orleans in April. Funding was provided by the U.S. National Heart, Lung and Blood Institute and the National Cancer Institute. (Note: Research presented at medical meetings should be considered preliminary until published in a peer-reviewed medical journal)
Posted by Jamie at 4:45 PM