Case of the Mondays 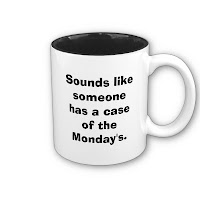 Today's challenge is to write about something that gets you down, burns you out, or makes you sad - purge it in a blog post, turn it around at the end, and tell Tuesday why you're ready for it.

Honestly, Mondays don't really feel like Mondays to me anymore. I used to dread them... the start of a new work-week. I'm not really on a normal week cycle... Jeremy's work-week is Wednesday through Sunday, so that's what mine has become (except I don't "dread" his "Monday"). Mondays are like our Saturday, so it's actually kinda nice.

Migraine is poorly understood and often misdiagnosed / mistreated. Research is poorly funded. Actually, that's an extreme understatement. The National Institute of Health (NIH) only allocates 1/10 of 1% (i.e., 0.01%) of their budget to Migraine and all other headache disorders combined. One-tenth of a percent... that blows my mind! No wonder there are so many people suffering from Migraine. Of all the medications used as Migraine preventive treatments, not a single one was developed primarily for Migraine treatment.

My hope is that by sharing our stories and joining together, that Migraineurs can one day be heard, understood, and treated. We're in desperate need of funding, but we also need to take opportunities that we each encounter to inform others about Migraine. That's one reason I keep this blog. It allows me to share information about Migraine, as well as my experience with Chronic Migraine, with others.


This post was written as part of the National Health Blog Posting Month (NHBPM).
Posted by Jamie at 10:15 PM