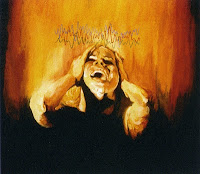 Today's challenge is to write a haiku for my condition (migraine). Haiku is "a form of Japanese poetry, consisting of 17 moras, in three phases of 5, 7, and 5 moras respectively." No rhyme or meter scheme is employed. Rather, the aim is to create something greater than the sum of the parts. Haiku were traditionally poems written about nature, and included a "season reference."